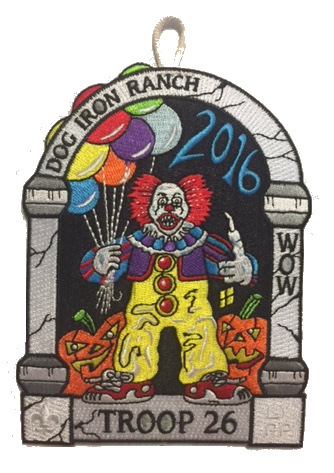 This is the patch for the 2016 Troop Webelos Hallo-Weekend. The theme, The Clown, is based on Bill’s childhood (and adulthood) fear of clowns. The clown was played by Eagle Scout Parker Plank, who convinced Bill to go through with the clown theme. Parker’s initials are ghosted in the bottom corner along with SPL Logan Yarroll’s. It is also rumored that the clown’s very large thumb was originally intended to be a very large knife, however it was modified after Bill heard about the coincidental and terrifying “clown attacks” of 2016 that started after the event had been planned but before the event took place. If you have any additional stories or information about this patch that you would like us to add to this page, please let us know.