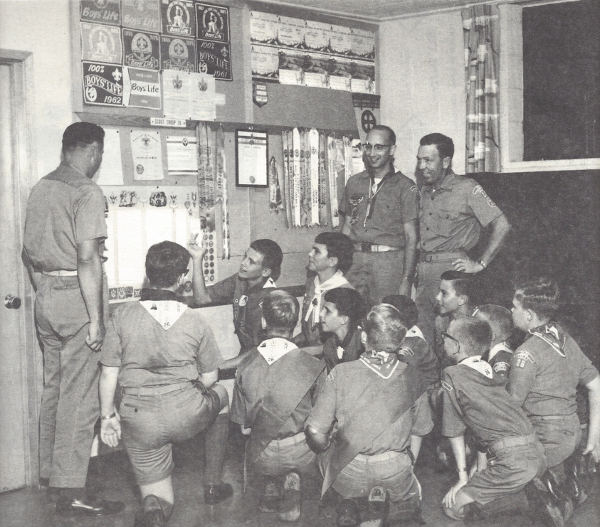 This is a really old photo.  Exact date unknown. Back in the middle to late 60s.   It was sometime before 1969 because this photo was taken in the basement of the old church at 11th and Sandusky.  On the left is Scoutmaster Bud Kunze.  The two leaders are, I think, Bob Moses and Earl Cox.  I may be wrong about that and, in fact, Bob Moses may have been the Scoutmaster.  I’m not sure when Bud took over from Bob.  Rick might know.  I can remember some of the young men on the floor but not all.  The boy on the left with his back to the photographer I think is Jeff Glanz.  The boy with his hand up pointing at the Advancement Chart is Mitch Dittus.  His little brother, Tommy, now Tom Dittis, was one of my first recruits in 1969, made Eagle Scout and later started the Blue Rose Cafe on South Peoria.  Mitch has passed away but when he grew up he was instrumental in getting the Tulsa Street School started on the site of my old elementary school, Franklin on 11th and Yale.  Right behind Mitch in the photo is Warren Peters.  The scout in the very middle with the different type of neckerchief on, I’m almost sure, is Rick Hayes.  Look at all those ribbons on the wall.  Look at all that perfect uniforming.  Troop 26 had a great history long before I got there.