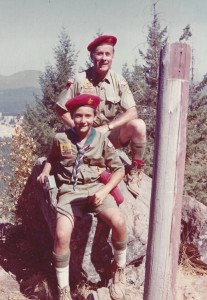 This photo was taken in the hills overlooking the first National Jamboree that Troop 26 attended. It was 1973. The place? Coeur D’alene Idaho and Farragut State Park. There was a second jamboree that summer. Idaho was Jamboree West. Jamboree East was held at Moraine State Park in Pennsylvania. Troop 26 went west. The combined total for the two jamborees was 73,610 scouts. This is one of my favorite photos from that jamboree. Adult leader Leon Smith was the oldest Troop 26 participant. And Scout Rol Avery was the youngest. Leon was an Assistant SM with Scoutmaster Bud Kunze when I became Scoutmaster in 1969. Leon’s son, Neil Smith, was my first SPL.