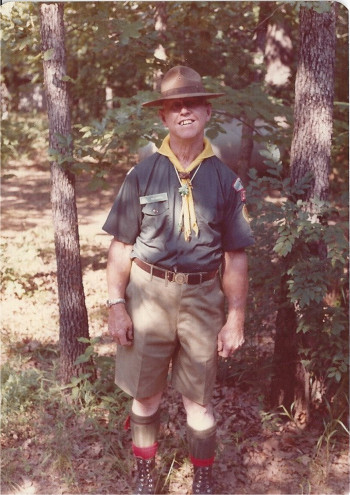 Many of our former scouts will remember a place called “The Explorer Base” situated near White Horn Cove on Lake Ft. Gibson outside Wagoner, Oklahoma.  Some of our greatest memories were born at that campground.  It was a Corp of Engineers property leased to the Indian Nations Council back in the 70’s.  This photo is of Bob Winters, the jovial and lovable Ranger for the property.  Everybody who camped at the Explorer Base remembers Bob.  Friendly, helpful, and committed to the boy’s camping experience, Bob was one of the reasons we camped there.  I haven’t seen many photos of Bob, this may be the only one I’ve ever seen.  Bob was a valued member of the Pine Tree Staff.  The Pine Tree, whose early courses were held at the Base, always included Bob in their activities.   Bob Winters is a great Troop 26 memory.  He was also featured on an early Troop 26 patch along with his dogs, waving goodbye to Troop 26 scouts as they went home from a wonderful weekend.  This photo is a treasure.